A joke from (Pvt.) Joker 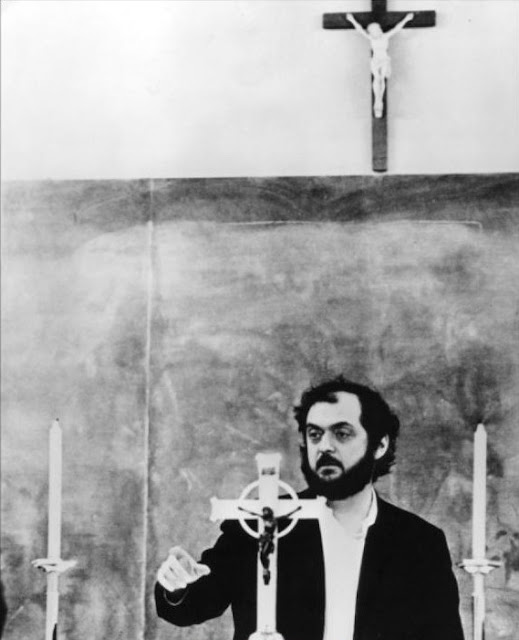 Stanley Kubrick pe platourile de filmare la A Clockwork Orange/1971
(sursă foto: toutlecine.com)
"One day I said: «I got a joke for you - you’re dead.» He said, «It’s not funny.» I said: «Let me tell the joke. Steven Spielberg’s dead, too.» He said, «Steven’s dead, oh, that’s funny.» And I said: «You’re dead and you’re up in heaven and Steven Spielberg has just died and he’s being greeted at the gate by Gabriel and Gabriel says: God’s really dug a lot of your movies and he wants to make sure that you’re comfortable. If there’s anything you need, you come to me, I’m your man. And Steven says, Well, you know, I always wanted to meet Stanley Kubrick, do you think you could arrange that?
And Gabriel looks at him and says: You know, Steven, of all the things that you could ask for, why would you ask for that? You know that Stanley doesn’t take meetings. He says, Well, you said that if there was anything I wanted. Gabriel says: I’m really sorry. I can’t do that. So now he’s showing him around heaven and Steven sees this guy wearing an army jacket with a beard riding a bicycle. And Steven says to Gabriel: Oh, my God, look, over there, that’s Stanley Kubrick. Couldn’t we just stop him and say hello? And Gabriel pulls Steven to the side and says, That’s not Stanley Kubrick; that’s God - he just thinks he’s Stanley Kubrick.»"
Un banc, i-am putea spune aşa, nu?, pe seama lui Stanley Kubrick, cică bancul său preferat despre el însuşi, spus de Matthew Modine (titularul rolului principal din Full Metal Jacket/1987) în What They Say About Stanley Kubrick (New York Times, 4 iulie 1999)
semnat cinesseur at 19:00
Trimiteți prin e-mail Postați pe blog!Distribuiți pe TwitterDistribuiți pe FacebookTrimiteți către Pinterest
Labels Cineau(c)tori
Postare mai nouă Postare mai veche Pagina de pornire