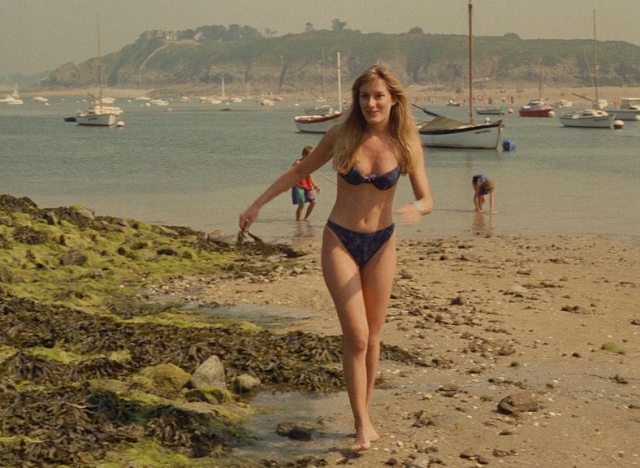 „To limit a too spectacular use of the boom, high-frequency microphones were cleverly camouflaged: in Amanda Langlet’s blouse, or in Aurélia Nolin’s long hair. To avoid attracting groups of onlookers or people looking at the camera, Rohmer, made unrecognizable by his dark glasses and kerchief on his head, moved away from the filming team and waited for the crowd’s curiosity to dissipate. Then he inconspicuously lifted his kerchief, which meant, in his coded language: «Action!»

La Fabrique du Conte d’été (The making of A Tale of Summer) has to be seen. It is a feature-length documentary put together by Jean-André Fieschi on the basis of moments filmed on-site by Françoise Etchegaray (among many other informal «making of» films made by her, which remain an archival treasure to be explored). In it the making of A Tale of Summer resembles a bizarre Balzacian conspiracy led by a tall old man with a masked face leading his little troupe onto strategic sites and communicating with his players only through signs. In fact, every detail was decided in advance, in the mind of the metteur en scène and in his preliminary discussions with Diane Baratier or Pascal Ribier. It remained only to make a few adjustments and to keep an eye out for the event that was going to rise up within the shot. «Everything was planned,» Melvil Poupaud reported:

Éric had calculated the schedule of the tides, the statistics for the sun, he had scouted the sites a year in advance…When we were finally ready to start filming, he was very excited during the shooting, very attentive to the camera. That confirmed the impression that I had when he chose me: everything was already in place, everything was already framed, he was just waiting for reality to come into the field.”