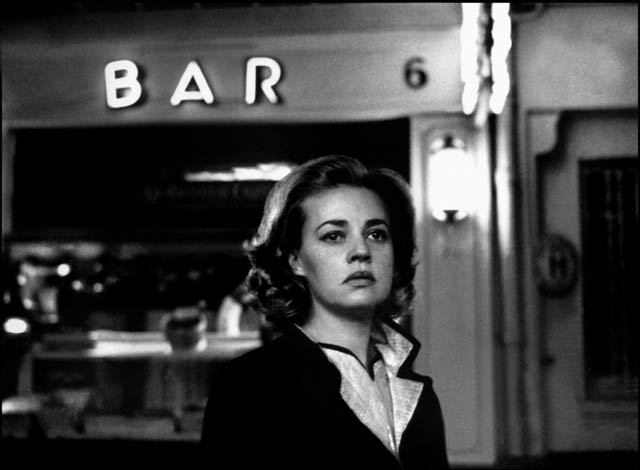 Now people often say, “You discovered Jeanne Moreau.” I didn’t - she was already a star then, a B movie star. Also, she was recognized as the prime stage actress of her generation. She had been at the Comédie Française; she had worked with Gérard Philippe. But in films she had never come true, except in those B movie thrillers with Jean Gabin, where her roles were not terribly interesting. But she was a commercial plus. In fact, the distributor insisted that we cast Jeanne Moreau. Suddenly they discovered that she was potentially a big film star. Up until then people used to say that although she was a great actress, and very sexy, she was simply not photogenic.

I had this great cameraman, Henri Decaë, whom I knew from the early Melville films. I, as well as those in the New Wave, admired Decaë tremendously. He started me, he started Chabrol, and then Truffaut, and then a number of others. When we started shooting, the first scenes we did with Jeanne Moreau were in the streets, on the Champs-Élysées. We had the camera in a baby carriage, and she had no light - it was black and white of course; we were using this new fast film, the Tri-X, which serious film makers thought too grainy. We did several long tracking shots of Jeanne Moreau…she was lit only by the windows of the ChampsÉlysées. That had never been done. Cameramen would have forced her to wear a lot of make-up and they would put a lot of light on her because, supposedly, her face was not photogenic.

That first week there was a rebellion of the technicians at the lab after they had seen the dailies. They went to the producer and said, “You must not let Malle and Decaë destroy Jeanne Moreau.” They were horrified. But when Elevator was released, suddenly something of Jeanne Moreau’s essential qualities came out: she could be almost ugly and then ten seconds later she would turn her face and would be incredibly attractive. But she would be herself. And, of course, it was confirmed by The Lovers, which I did almost right after. So I contributed to making her into a star, but she had already made something like seven or eight films. (excerpted from Malle on Malle, edited by Philip French, 1993)
semnat cinesseur at 19:00
Trimiteți prin e-mail Postați pe blog!Distribuiți pe TwitterDistribuiți pe FacebookTrimiteți către Pinterest
Labels Cine-qua-non, Stardust Memories
Postare mai nouă Postare mai veche Pagina de pornire